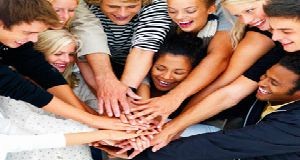 The original form of group psychotherapy is psychodrama. Jacob Levy Moreno(link is external),the man who developed psychodrama, also coined the phrases “group therapy” and “group psychotherapy.” At it’s core psychodrama uses deep action methods to explore and correct issues that have been identified in the group. Often there a protagonist is chosen who’s issue represents the main elements of the group. The protagonist brings forward their drama and the members of the group are brought in as auxiliaries to aid the dramatic enactment of the scene(s) brought forward by the protagonist.

As an example, supposing a person came into group and complained about how stressful the holiday meal was, and that as the extended family sat around the table various arguments and disagreements broke out. This triggered a memory of how holiday meals went in the past when she was a child: her parents always bickering, and her siblings fighting. The resulting distress in the current situation was enough to bring the issue into group.

If there is sufficient support in the group for the protagonist to work it is likely that the current scene would be enacted as it happened, with an emphasis on the feelings evoked for the protagonist. Members of the group would be chosen to play the different roles, including people assigned to express the different feelings that had come up. Then the original dinner scene would be reenacted and those feelings examined and expressed. At that point the protagonist usually becomes aware that there was an unexpressed feeling in the original scene (when she was a child) and that scene gets reenacted and the feelings expressed through the role-playing.

Finally, the current scene is done again with alternate endings. Typically these endings would empower the protagonist or correct the scene in some way.

My fellow psychodramatists would probably cringe at the over simplification of this explanation, and they would (rightly) point out that the core element of psychodrama is the fact that dramas unfold in unpredictable ways, and something suggesting psychodrama is formulaic isn’t a idealistic description. While this is true, it is also true that dramas unfold in ways that have patterns of recurrence. One major pattern is that previous events crate scene memories that influence us. That is why the current issues frequently have their inception during childhood.

Psychodrama is an experiential form of therapy that allows for correction through the re-experiencing and then dynamic improvement through expression and role rehearsal.